The 'Lost' Arapahoe Bar and City of Arapahoe

Located just east of the Table Mountains along the northern banks of Clear Creek west of today’s McIntyre Street, it was the fourth town established in northern Colorado, after only Auraria, Montana City and Denver. Arapahoe City was established by gold seekers adjoining their mining claims on Arapahoe Bar, the gold-laden placer bar of Clear Creek at this spot.

Although not long lived in and of itself, Arapahoe City would play an important role in the future of Jefferson County and Colorado. The story of Arapahoe City begins much earlier than its sesquicentennial of this year. In September of 1858 the Doniphan Party of gold prospectors, including Marshall Cook, arrived in Colorado and proceeded to prospect in the area of Vasquez Fork, as the river had come to be known. They were there to see what leads could be found, and upon investigation of Ralston Creek they were satisfied of the potential to find gold, having found float gold of a fine, flat and scaly character there. They proceeded to prospect upon the Vasquez at the eastern base of the Table Mountains. There, according to Cook, they encountered a mysterious sight:

"We found upon measurement and staking that the bar had been staked on some previous occasions but by who or when no record was left only that of the three to five boulders that marked the corner, being nearly half buryed (sic) in the earth denoting that many years had elapsed since being placed in their respective position marking the meets and bounds of former prospectors as well as our future wealth. The above mentioned boulders were about the size of a mans fist and larger, placed on the brink of the bar at regular intervals of one hundred feet apart lineal measurement, by the side of the ancient landmarks we placed our stakes with the no. of the claim marked there upon it."

As he would later discover, Cook had encountered the remains of the mining claims of the Estes Party, which had preceded his arrival there by 24 years. They had originally laid out their claims there in 1834. The new mining district of Arapahoe Bar had again located and confirmed the bounds of what was possibly the oldest mining claim in northern Colorado, laid out many years before the first widely noted gold discoveries in the region took place. Of the Estes Party, Cook wrote in the 1880s:

"Prospected along the eastern base of the mountains to head of the Platte not finding any paying prospects...they reached Vasques fork of the Platte where just below the two table mountains that the stream flowed between, on the bank of the Creek that is now known as Arapahoe Bar. Here they staked the bar into one hundred feet front measurement running across the width of the bar. The old corner I found in the winter of 1858 marked with from three to five boulders of regular intervals of one hundred feet apart and corresponded with the measurement made by Arapahoe Town company that relocated the same bar in the winter of ‘58. The Estes party mined in and along the creek banks until the water raised from the melting of snow then they tried the bar which did not pay with the Georgia rocker. From here the party worked their way north along the base of the mountains until they reached the Black Hill, where the party spent the next winter and did considerable mining that paid them the largest of any mining operation that they had been engaged in while out. The Indians became menacing and the miners through prudence the better part of valor, hid their tools where they worked last and returned to Mo... "

On November 29, 1858 the Arapahoe Town Company was organized and elected Marshall Cook as president, George B. Allen Secretary and Thomas L. Golden, Treasurer. The Arapahoe Town Company was very generous, allowing every settler a lot free of charge, with members of the town company required to build a cabin or home in a specified period of time. According to Golden, in writing to the Missouri Republican newspaper, the town received its name along some rather colorful reasoning:

"Indians are thick here. We apprehend danger from them. They have sent us word by some of their chiefs to quit their country, but we think we can stand them a rub, as we have 700 white men here. We have laid out a town by the name of Arapahoe City after the aborigenes."

According to old Jefferson County property records Arapahoe City appears to have been laid out in the standard grid system of the time and surveyed into blocks and lots. One direction of the town’s streets were lettered, such as A Street, B Street, etc. at least up to G Street, while streets in the other direction were numbered, at least up to 2nd Street. The townsite was laid out by George B. Allen. Arapahoe City initially served in part as shelter from the elements for gold seekers in the winter of 1858-59, which was very harsh. It also was like a base camp for miners to go and prospect in the mountains. Among these were two who had arrived, apparently individually, from prospecting on the Laramie toward the end of 1858, named George Andrew Jackson and John Hamilton Gregory. At Arapahoe City Jackson built himself a cabin and intended to remain there the balance of the winter. There he befriended Tom Golden, and continued to keep an eye out for gold. After prospecting on Clear Creek he was convinced he could find good amounts of coarse gold further into the mountains, and impatiently tried to find it but was stymied by the depth of snow on several attempts. However, his perseverance finally paid off when on January 8, 1859 he wrote in his diary:

“Well, Tom old boy, I’ve got the diggins at last…Dug and panned today until my belt-knife was worn out, so I will have to quit or use my skinning knife. I have about 1/2 oz. gold so will quit and try to get back in the Spring.”


Gregory, meanwhile, had also ventured into the mountains, eventually making it to the future site of Black Hawk. He found indications of gold; however, a snowstorm forced him to retreat to Arapahoe City. Both remained in town until spring. With whom he would entrust the secret men would kill for, Jackson wrote “Tom Golden is the only man who knows I found gold on the head of the creek, and as his mouth is as tight as a No. 4 Beaver trap, I am not uneasy.” Gregory told his secret to a few people, among whom was David K. Wall, who was starting out in farming in the Golden valley, who agreed to grubstake Gregory to provide him food for further prospecting efforts. Jackson and Gregory returned to and confirmed their discoveries, which proved to be among the most important in Colorado history. Also during that spring there was the first building boom in Jefferson County history in Arapahoe City, where around 20 buildings were built. Comprising most of the town’s construction to that time, they were not built close to the river where the mining district was, but upon the bluff overlooking it. Arapahoe City’s buildings were made up of log and frame structures, the largest known over time being a two-story frame commercial building with a false front. Also in 1859 the Casto-Kendall Company became the town’s first transportation firm. The first to take a wagon to the Gregory Diggings in May 1859, they had hauled the goods of the Gregory party themselves including only the front wheels of the wagons as no roads existed at the time. As a matter of fact, they went straight up the faces of the mountains, with the Gregory members walking alongside.


By the end of 1859 Arapahoe City had around 200 inhabitants. This was enough to warrant its getting the honor of having the first post office in Jefferson County, of which Asa Smith was postmaster, in 1860. During 1859 year Arapahoe inhabitants had numbered one-fifth of the number of delegates at the first Jefferson Territorial convention. At the constitutional convention held in Denver that August Arapahoe City sent the same number of delegates as the new upstart town of Golden City (7), including Marshall Cook, George B. Allen, Samuel S. Curtis, M. Chilcott, J.R. Gould, Asa Smith and W.L. Crocker.


By the close of 1860, Arapahoe City had downsized to 21 buildings, and a total of 80 inhabitants. In time it faded away, with gold mined intermittently from its historic placer bar including hydraulic and dredge mining. The last Arapahoe City building at its site, the early home of the family of Jonas E. Wannemaker, burned to the ground in 1913. However, it is possible Arapahoe City buildings have survived elsewhere, as noted Colorado historian Jerome Smiley wrote “There were fifty or sixty cabins erected on the site. The rise and prosperity of Golden caused the decline and fall of Arapahoe. Many moved their log buildings to Golden.” Over time the townsite itself vanished. On April 28, 1946, the Colorado Historical Society placed a bronze marker on the site of Arapahoe City, and its general area, now known as Fairmount, remains today among the longest continuously settled places in Colorado.


gold was first discovered in Jefferson County, in 1834 at the placer sandbar of Clear Creek where Arapahoe City would stand. The Estes Party laid out our first mining claims with rocks and got gold using a Georgia Rocker until rising spring waters forced them out. 24 years later when the Doniphan Party arrived they found gold and realized the meaning of the now half-buried claim stones and laid the claims of Jeffco’s first mining district alongside them, from which Arapahoe City rose. People of Arapahoe wanted to find out where in the mountains the mother lode was where these daughter deposits in the sand bar washed down from.

John Hamilton Gregory came to Arapahoe City in January 1859. While finding mountain gold snow forced him back, and David K. Wall gave him food to follow up his find. On May 6, 1859 Gregory found the vein that revealed the great gold riches of today’s Gilpin County. Gregory’s and Jackson’s discoveries confirmed the faith of the miners and put the Gold Rush into full boom. After $21,000 made Gregory returned east and was never heard from again. 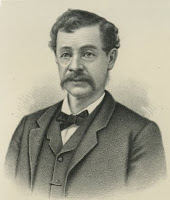 George Andrew Jackson came to Arapahoe City in late December 1858. With his partner, Thomas L. Golden, he went from Arapahoe and his camp in the Golden valley and explored for gold in the mountains. He struck the rich find of today’s Idaho Springs on January 7, 1859, sharing his secret only with Golden. Jackson’s and Gregory’s discoveries, putting the Gold Rush into high gear, were pivotal to creating Colorado. Jackson lived here the rest of his life until dying at Ouray in 1897.

Today, whatever remains of the Arapahoe bar itself is on Coors property and the all that remains of Aprapahoe City is the monument on McIntyre St (pictued above).
Posted by RD at 8:20 PM